K2 trek via Concordia: Trekking through the valley of Mountains

Arranged by Snowland Treks and Tours, our trip started from Islamabad where we stayed for a day. The next morning, we took a short, but very scenic, flight to Skardu. We acquired a great deal of interesting information about our destination from the plane’s captain, which naturally got us pumped for the journey ahead.

Following a brief stay in Skardu, we left for the town of Askole, which is only 115km away but the rocky roads, not to mention the landslides and floods that we encountered on our way stretched our journey an additional five hours.

Arriving in Askole, we stopped for some garam parathas, and washed them down with wonderful milky tea before starting our first trek to the Jhula campsite.

We walked through a small lane in the town of Askole that widened as we exited the village. Then, we entered Shigar Valley, where I saw jagged mountain peaks and views that quite literally took my breath away. 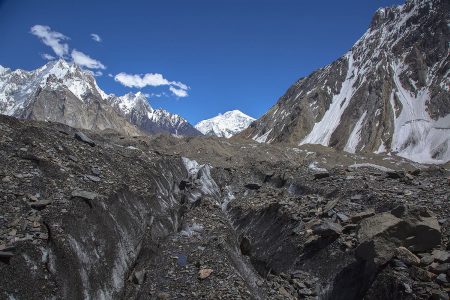 Situated at a distance of 18kms from Askole, we reached Jhula just before sunset. We parked our camp next to the river, which afforded us an ethereal view of the Barkhudas mountain peak.

The next morning, we trekked from Jhula to Payu campsite, which is 22kms away, at 200 meters of elevation gain; the route that we took was close to the river bank with many uninhabited houses.

From Payu, we made our way to the Baltoro glacier, the focal point of our trek. The journey to our next campsite Khoburshe was 15km away, with 500 metres elevation gain.

The long distance and the formidable gain of elevation, coupled with our first, tentative steps on a glacier, was taxing but also proved rewarding as we got a glimpse of the spectacular Trango and Lobsang mountain spires as well as the starting point of the serene Baltoro River from here.

Near the Khoburshe campsite, a lake has sprung up due to a glacier melt, which required us to take a detour, adding about another two kilometers to the trek; we retired at the camp for the night.

The next morning, we trekked from Khoburshe to Urdukas, which is situated at a relatively short distance of 6km, with 200m of elevation gain.

The journey was, by far, the most wonderful part of the trek as we crossed two glaciers and glacial streams to reach Urdukas, surrounded by tall imposing mountains. It is a wonderful campsite that sits atop huge rocks.

As we set up our tents and settled into them, we heard the sound of music. Venturing outside, we saw porters from different teams who had gathered around a big boulder and were dancing and celebrating as it was Eid!

Traversing along the route, we saw large protruding chunks of snow, known as snow capsules. These capsules vary in size and are sparsely found along the trek.

Our campsite at Goro II was the coldest on the trek. When I woke up in the middle of the night, my tent was covered in frost.

The morning that greeted me was equally cold, if not more. But the day was special. Crossing Gora II, we finally saw the magnificent K2 mountain and other stunning peaks such as Muztagh Tower (7273 metres) and Mitre Peak (6010m).

Our next camp on Concordia glacier was next to Mitre Peak. With that as our reference, we walked about 12kms to reach Concordia.

Near Concordia, we had to negotiate many complicated crevasses. We also heard loud songs of the glacier cracking up.

After what seemed like an eternity, we arrived at our camp on Concordia. Situated at 4,600 meters of elevation, the high altitude made us easily breathless, even if the movement was something as small as getting up.

Most expeditions end on Concordia after which trekkers head back to Askole. One can also take an alternative route by hiking to Ali Camp and then crossing the Gondogoro Pass to enter Hushe Valley and return from there. It, however, requires expert technical climbing skills.

In our case, we decided to visit the K2 base camp, which is approximately 11kms away from Concordia, save for one team member who ended up going to the Gilkey Memorial.

The three of us, including myself, stayed back at the K2 base camp for about an hour and had lunch with an international expedition team before returning to Concordia.

The return journey from Concordia to Askole was 90kms and took us three whole days to return to Askole from where we returned to Skardu the same evening; thus ending our intense, adrenaline-filled trek, one we are bound to remember for the rest of our lives.