Pakistani cuisine (Urdu: پاکستانی پکوان‎) can be characterized by a blend of various regional cooking traditions of the Indian subcontinent, Central Asia as well as elements from its Mughal legacy. The various cuisines are derived from Pakistan’s ethnic and cultural diversity.
Cuisine from the eastern provinces of Punjab and Sindh are characterized as “highly seasoned” and “spicy”, which is characteristic of flavors of the East. Cuisine from the western and Northern provinces of Azad Jammu & Kashmir, Balochistan, Khyber Pakhtunkhwa, Tribal Areas and the Gilgit-Baltistan are characterized as “mild” which is characteristic of flavors of the Central Asian region.
International cuisine and fast food are popular in the cities. Blending local and foreign recipes (fusion food), such as Pakistani Chinese cuisine, is common in large urban centers. Furthermore, as a result of lifestyle changes, ready-made masala mixes (mixed and ready-to-use spices) are becoming increasingly popular. However, given the diversity of the people of Pakistan, cuisines generally differ from home to home and may be different from mainstream Pakistani cuisine. 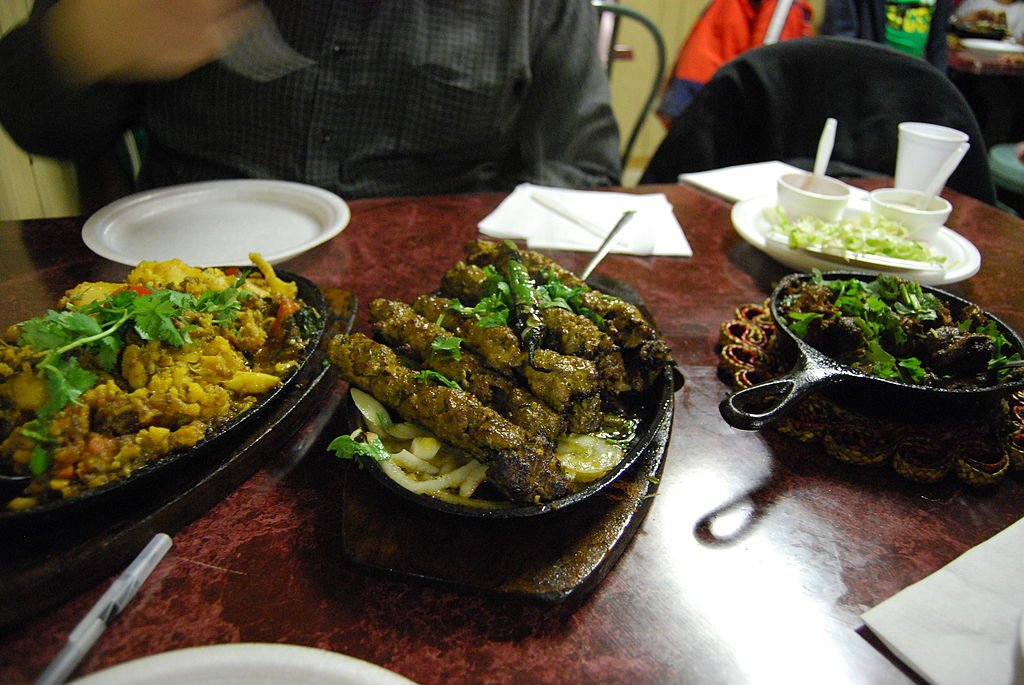 Pakistanis generally eat three meals a day, which are breakfast, lunch, and dinner. During the evening, many families have tea, which goes along with baked/fried snacks from a local bakery (or prepared at home). During the Islamic holy month of Ramadan, the eating patterns change to suhur, pronounced “Sehar” in Pakistan, and iftar. It is considered proper to eat only with the right hand as per Islamic tradition (also a tradition in many other Asian cultures). Many Pakistani families, particularly when guests are too many to fit at a table, eat sitting at a cloth known as Dastarkhān, which is spread out on the floor. In Pakistan, many street eateries serve food on a takht, in a style similar to what is seen in Afghanistan. A takht is a raised platform, where people eat their food sitting cross-legged, after taking their shoes off. Most Pakistanis used to eat on a takht. Pakistanis often eat with their hands, scooping up solid food along with sauce with a piece of baked bread (naan) or rice.

Having Nihari and Halwa Puri in breakfast is popular among people living in Lahore.
A typical Pakistani breakfast, locally called nāshtā (ناشتہ), consists of eggs (boiled/scrambled/fried/omelette), a slice of loaf bread or roti, parathas, sheermal with tea or lassi, kulcha with chole, qeema (minced meat), fresh seasonal fruits (mangoes, apples, melons, bananas, etc.), milk, honey, butter, jam, shami kebab or nuts. Sometimes breakfast includes baked goods like bakarkhani and rusks. During holidays and weekends, halwa poori and chickpeas are sometimes eaten. In Punjab, sarson ka saag (mustard leaves) and maakai ki roti (cornbread) is a local favourite. Punjabi people also enjoy khatchauri, a savory pastry filled with cheese. Pakistan is not unlike many other Asian nations, in the sense that meat dishes are eaten as breakfast, especially on holidays. A traditional Sunday breakfast might be Siri-Payay (the head and feet of lamb or cow) or Nihari (نہاری) (a dish which is cooked overnight to get the meat extremely tender. The name “Nihari” comes from the Arabic word “Nihar”, meaning “Day” or “Day break”.) Many people used to take “Bong” (Shank curry) in their Sunday brunch.

A typical Pakistani lunch consists of meat curry along with rice or a pile of roti. Daal chawal is among the most commonly taken dishes at lunch. Breads such as roti or naan are usually served for dinner, but have become more common during the day so that rice may be served for dinner. Popular lunch dishes may include aloo gosht (meat and potato curry) or any vegetable with mutton. Chicken dishes like chicken karahi are also popular. Alternatively, roadside food stalls often sell just lentils and tandoori rotis, or masala stews with chapatis. People who live near the main rivers also eat fish for lunch, which is sometimes cooked in the tandoori style. 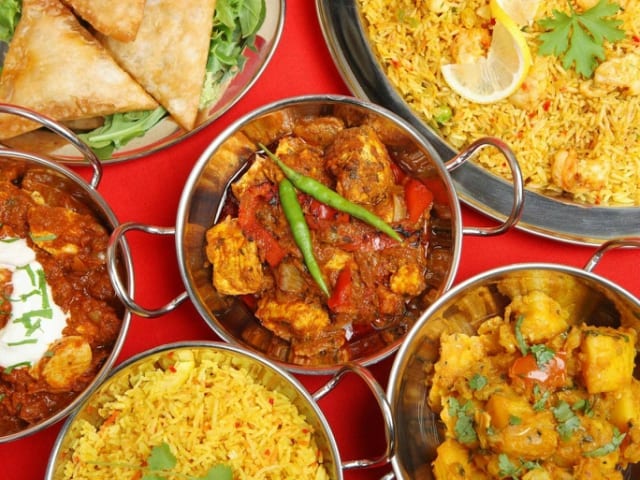 A variety of Pakistani dinner dishes – Starting from the left: gobi aloo, seekh kebab, and beef karahi
Dinner is considered the main meal of the day as the whole family gathers for the occasion. Food which requires more preparation and which is more savoury (such as biryani, nihari, pulao, kofte, kebabs, qeema, korma) are prepared. Lentils are also a dinnertime staple. These are served with roti or naan along with yogurt, pickle and salad. The dinner may sometimes be followed by fresh fruit, or on festive occasions, traditional desserts like kheer, gulab jamun, shahi tukray, gajraila, qulfi or ras malai. 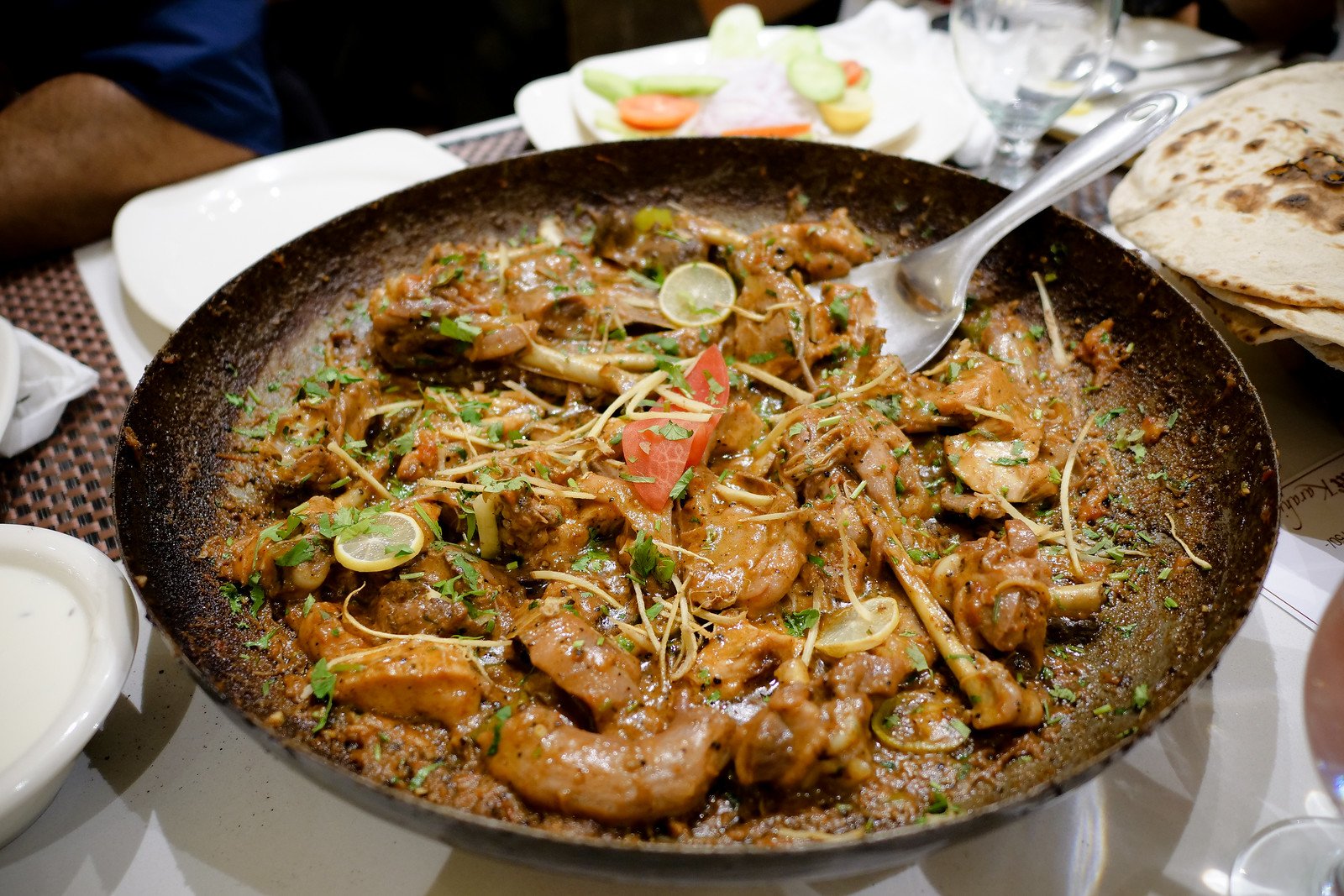 Pakistani snacks comprise food items in Pakistan that are quick to prepare, spicy, usually fried, and eaten in the evening or morning with tea or with any one of the meals as a side dish. A given snack may be part of a local culture, and its preparation and popularity can vary from place to place. These snacks are often prepared and sold by hawkers on footpaths, railway stations and other such places, although they may also be served at restaurants. Some typical snacks are Dahi Bhala, Aloo tikki, chaat & Samosa Chaat, Bun kebab, Chana Masala, Chapli kebab, Shami kebab, Seekh Kebab, Malai Tikka Kebab (Meat and Yogurt), Reshami Kebab, Pakora, and Papar. Others include Katchauri, pakoras—either neem pakoras or besan (chickpea) Pakoras, Gol Gappay, Samosas—vegetable or beef, Bhail Puri, Daal Seu, Panipuri, and egg rolls. Nuts, such as pistachios and pine nuts, are also often eaten at home.